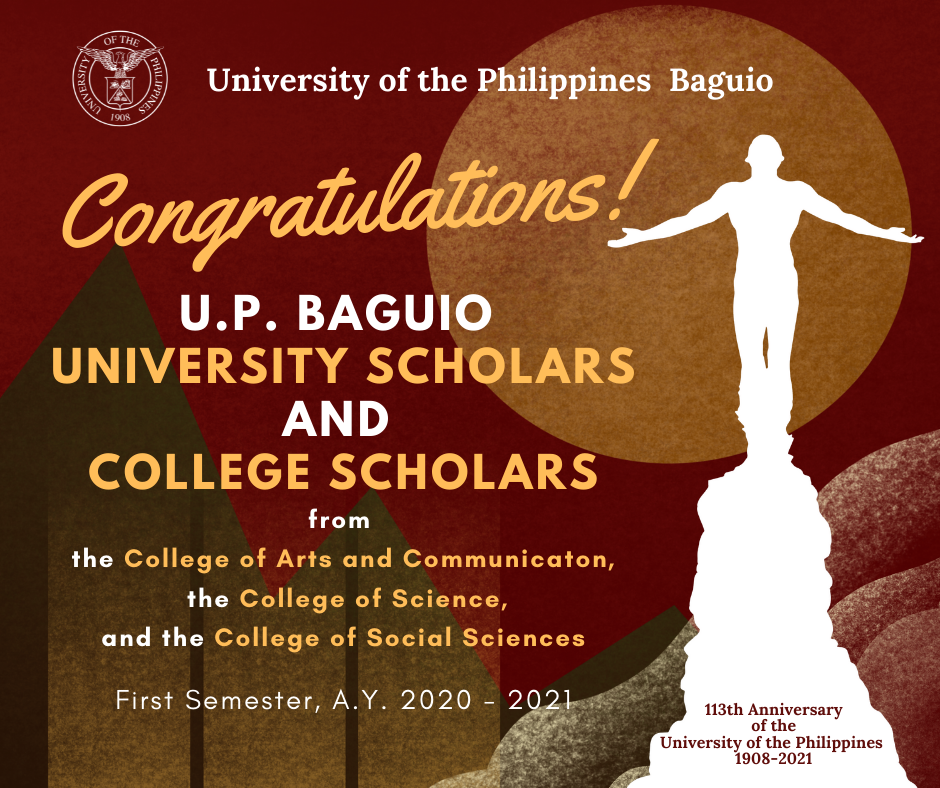 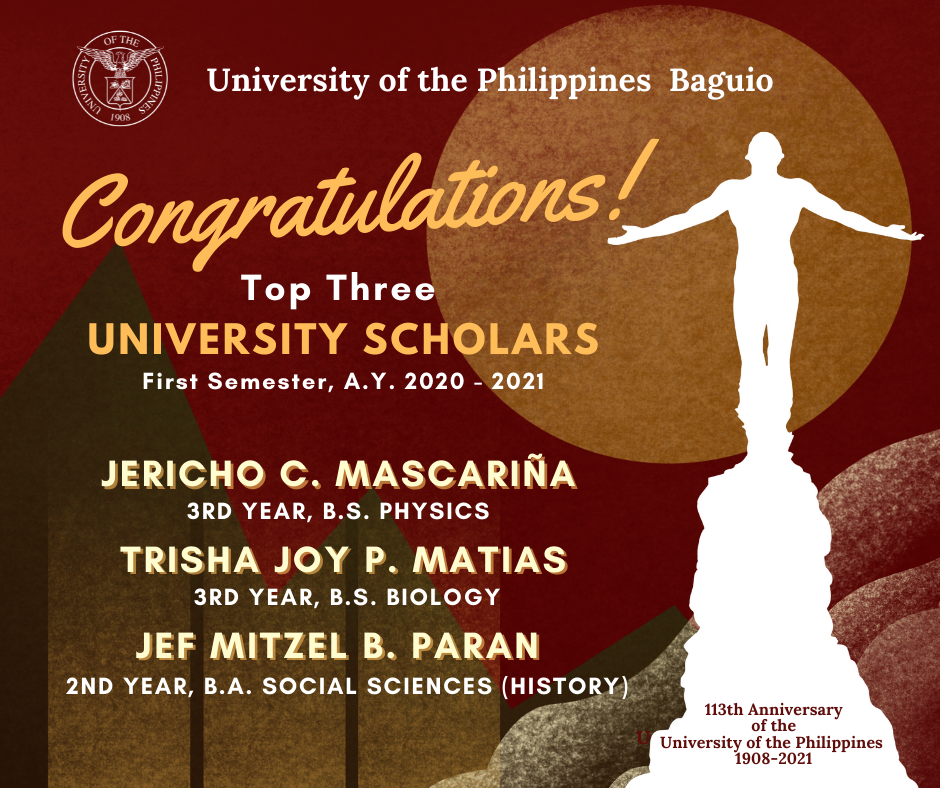 Three undergraduate students made it to the top in the list of the 471 University Scholars for the term. The three each obtained a 1.0 general weighted average (GWA), namely, BS Physics student Jericho Cabrera Mascarina, BS Biology student Trisha Joy Pineda Matias, and BA Social Sciences student Jef Mitzel Bulaon Paran. Both Mascarina and Matias are third-year students from the College of Science, while Paran is a second-year History major from the College of Social Sciences.

Among the University Scholars, 163 come from the College of Science (CS), 90 of whom are BS Biology students, 24 are BS Computer Science students, 17 are BS Mathematics students, 27 are BS Physics students, 2 students each from the MS in Conservation and Restoration Ecology and MS Mathematics programs, and one is a PhD in Mathematics student. A total of 182 of the University scholars are from the College of Social Sciences (CSS), 129 of whom are BA Social Sciences students, 52 are BS Management Economics students, and one student of the MA in Social and Development Studies program. The rest of the University Scholars are 126 students from the College of Arts and Communication (CAC), 57 of whom are BA Communication students, 47 are BA in Language and Literature students, 17 are Bachelor of Fine Arts students, 3 are Certificate in Fine Arts students, and 2 students of MA in Language and Literature. In UP, any undergraduate student who obtains at the end of the semester an absolute minimum weighted average of 1.45 or better, or a graduate student with an absolute minimum weighted average of 1.25 or better is given the honorific scholarship of University Scholar. University academic awardees are listed in the President’s List of Scholars.

In addition to the University Scholars, 636 UP Baguio students are college academic awardees listed in the Dean’s List of Scholars. In UP, any undergraduate student who, not being classed as a University Scholar, obtain at the end of the semester an absolute minimum weighted average of 1.75 or better, or a graduate student who obtains an absolute minimum weighted average of 1.50 or better, is given the honorific academic award, College Scholar. The CS recorded 246 College Scholars, majority of whom are BS Biology students at 126 in number. From the CSS are 186 College Scholars, of whom 160 are BA Social Sciences students and 26 are BS Management Economics students. Of the 204 College Scholars from the CAC, 142 are students of BA Communication, 46 are students of BA Language and Literature, and 16 are students of the Fine Arts program.

In lieu of the traditional ceremonies in a scholar’s convocation, the Office of the University Registrar and the colleges emailed today—on the occasion of the 113th foundation anniversary of the University of the Philippines—the digital version certificates to the awardees. The usual recognition program this time yields to the pressing need to ensure the promotion of health and safety of the community and the public including the scholars and their families. It is hoped that these recognitions serve as inspiration to both the awardees and their fellow students, especially during these truly challenging times.