Dr. Abansi is the new UP Baguio Chancellor 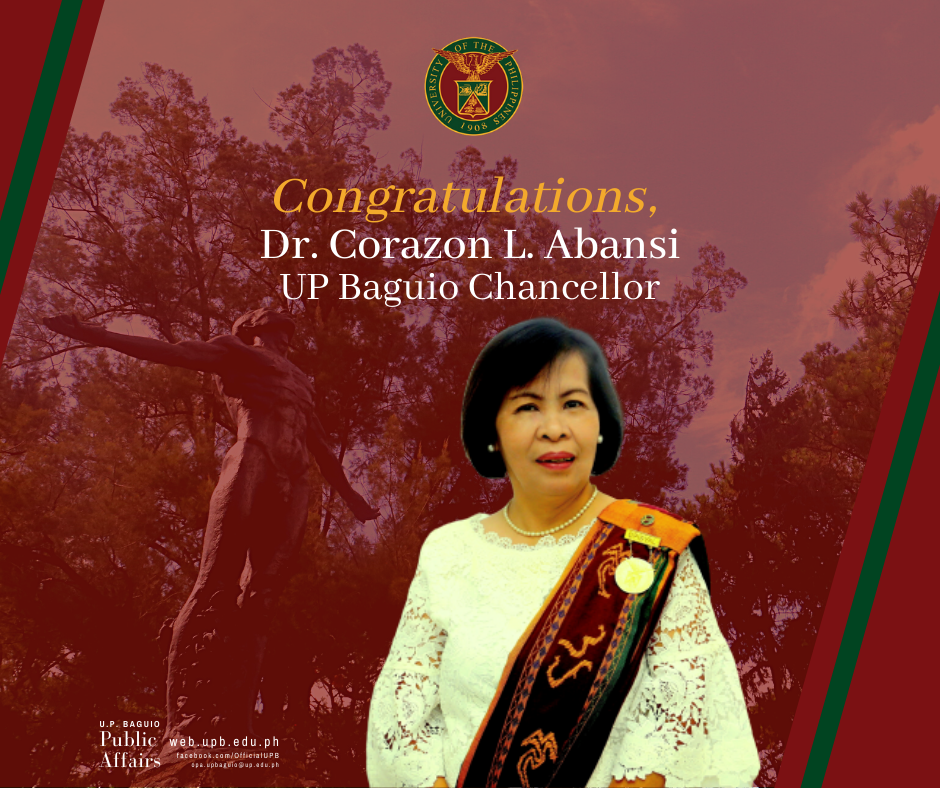 The Board of Regents of the University of the Philippines, in its 1359th Meeting held on 25 March 2021, approved the appointment of Professor Corazon L. Abansi as Chancellor of UP Baguio effective 14 April 2021 until 13 April 2024.

Prof. Abansi is the third chancellor of the University of the Philippines Baguio, immediately succeeding Dr. Raymundo Rovillos whose term ends on 13 April 2021. Dr. Rovillos served three full terms as chancellor from his initial appointment in 2012, succeeding Dr. Priscilla Supnet Macansantos. Dr. Macansantos also served three full terms as chancellor from 2003 to 2012, prior to which she served as acting chancellor (for the period December 2, 2002-April 13, 2003) when the UP College Baguio became a constituent university of the UP System on December 2, 2002, within her term as dean of the College (June 1, 2000-December 1, 2002).

In her summary of significant achievements and qualifications presented to the public as a nominee for the chancellorship, Dr. Abansi says that she sees herself "as a dynamic leader with significant managerial experience in higher education, a passionate teacher with sustained scholarship in multi-disciplinary research and a devoted servant of the community." This honing of her skills in coordination, negotiation and supervision comes from over a decade of serving in leadership positions in mission-critical offices in UP Baguio including as the University's Director of Students Affairs (AY 2012-2015), as the director of UP Baguio's Institute of Management (AY 2011-2012), and as Vice Chancellor for Academic Affairs (2015-2021). Prior to joining UP Baguio, Dr. Abansi was with the De La Salle University Lipa as Vice-Chancellor for Academics and Research.

A consummate scholar with multiple International Publication awards and consistent awardee of the One-UP Professorial Chair for two consecutive terms (2015-2017; 2018-2021), she has also been conferred the title of University Scientist I (2018-2020). Her research and advocacy interests include the protection of the environment and improvement of the quality of education. Contributing to her body of work are publications in the last ten years spawned by multidisciplinary and collaborative research projects with her colleagues from other disciplines and other universities.