#FACTCHECK: CPP founder Sison is NOT acting as an adviser for Leni Robredo's campaign 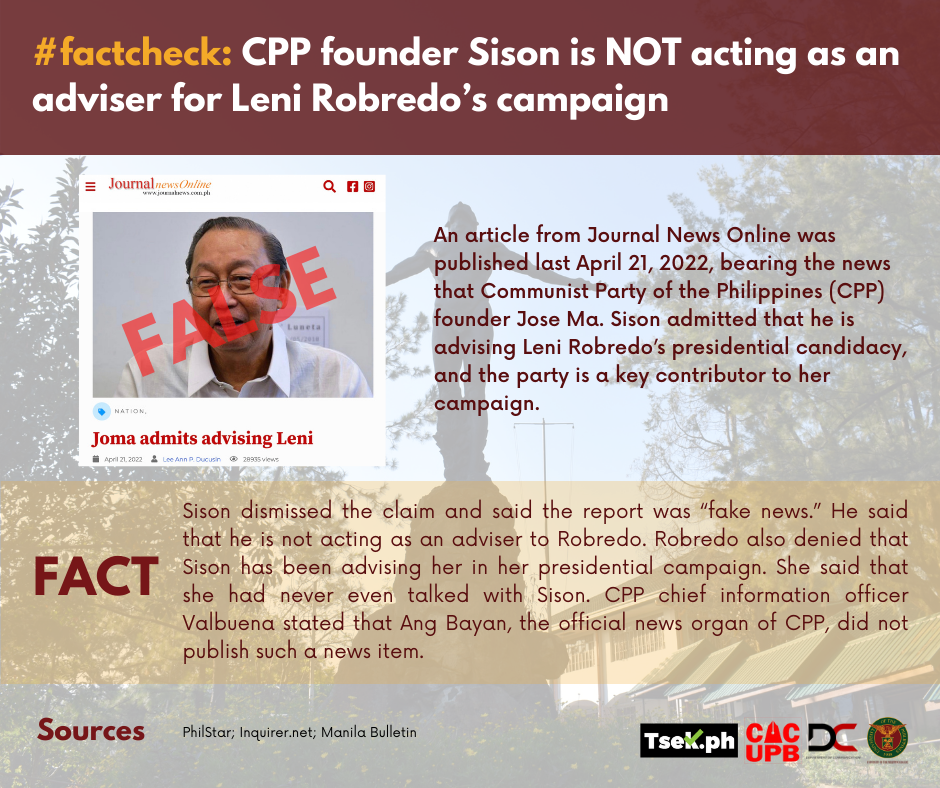 An article from Journal News Online was published last April 21, 2022, bearing the news that Communist Party of the Philippines (CPP) founder Jose Ma. Sison admitted that he is advising Leni Robredo’s presidential candidacy, and the party is a key contributor to her campaign.

However, the claim was FALSE and has already been denied by both Sison and Robredo

Sison dismissed the claim and said the report was “fake news.” He said that he is not acting as an adviser for Robredo. He also denied consulting with her spokesperson, Barry Guttierez. In addition, he also insisted that he never met the article’s writer, Dacusin, for an interview.

Robredo also denied that Sison has been advising her in her presidential campaign. She said that she had never even talked with Sison, who is exiled in the Netherlands.

The false claim was based on the statement supposedly released by Ang Bayan, the official news organ of CPP. However, CPP chief information officer, Marco Valbuena, stated that Ang Bayan did not publish such a news item. He also mentioned that the claim was meant to support past statements that the party plans to ally with Robredo.

In addition, the article was also shared by presidential candidate Ping Lacson on his verified Twitter account, which has almost 60,000 followers. Lacson’s caption to the tweet is, “Is this true? Are they that desperate to win?”